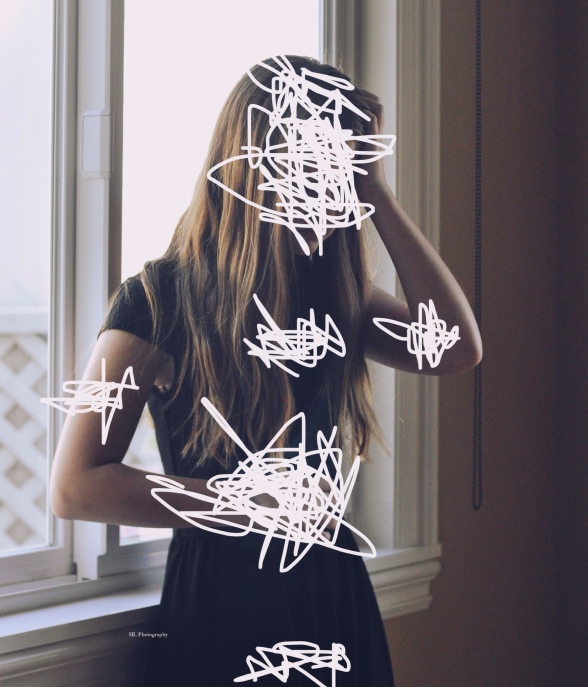 To reiterate: none of these posts are meant to be a conclusive picture of everyone who has the diagnosis. All of these are simply my experiences of a given diagnosis. GAD is a wide ranging diagnosis that takes lots of forms. If your experience of it is different from mine, I’d love to hear from you!

Generalized Anxiety Disorder is like having a broken alarm system. This is probably an overused metaphor, but whatever. Imagine you have a home alarm system that’s supposed to let you know whenever you’re in danger. It’s a magical alarm system that doesn’t just alert you to intruders, but also tells you if there’s a natural disaster or some sort of accident in your house waiting to happen. It’s suuuuper helpful. This is what normal anxiety is like. Normal people get afraid or worried or anxious when they have reason to believe that something is going to harm them. Sometimes this is in a very obvious way like if your car goes out of control, sometimes it’s in a more long term sense, like when you’re anxious about a test or a job interview (which has the potential to affect your future in positive or negative ways).

For most people, the strength of the alarm corresponds to the severity of the potential harm. If a bomb is about to fall on your house, your alarm system will be FREAKING OUT. If there’s about to be a thunderstorm, your house might beep at you a little and get you to look out the window. Same with emotions: we get very anxious about big things (like the bar exam or being very close to a large and dangerous animal) and kinda anxious about smaller things (a small quiz or slack rope walking a few feet about the ground). This isn’t across the board true, and certainly some people have one or two irrational fears, but for the most part anxiety follows a pretty predictable set of patterns.

Now imagine you have a house that has an alarm system that goes off whenever something is going to hurt you, but also will randomly go off at things like the neighbor’s cat or a kid on a bike, and when you try to turn it off it just keeps starting right back up again. Sometimes when it should give you a little nudge, like for a thunderstorm, it gives you the blaring DANGER DANGER of a bomb above your house.

Some of you might say “well just start ignoring the alarm.” But the alarm does still go off at all the right times too. You’re left with a near constant confusion about whether you’re in danger or not, trying to figure out how you can differentiate what’s a real threat and what’s not. It starts to wear on you, the noise and the uncertainty. You think you’re going crazy because you can’t tell what’s real and what’s not, when it’s reasonable to jump out of bed and pull out a baseball bat or when it’s reasonable to just wait it out.

This is a lot like what GAD is for me. It isn’t that I’m afraid of everything, or that I’m timid, or that I can’t talk to people. It’s that anxiety and uncertainty will hit me at the most unexpected times, sometimes for no discernible reason. A very big part of it is my anxiety just happens BIGGER than almost anyone else I’ve ever met. Catastrophizing is basically my middle name. Once in fifth grade I got a B on a test. I started freaking out and crying, leaving my teacher and my parents somewhat uncertain about how to reassure me that it was totally fine. In my mind I could see exactly how my future would go: the B would mean I wasn’t put in the honors classes in junior high, which meant that when I went to apply for high schools (because I went to a private school, high school required entrance exams and applications) I would be laughed out, and I would end up in the worst school ever which meant I wouldn’t get into a college, which meant that I would never have a good job and be miserable forever.

My brain is very, very good at consequences. As I’ve mentioned elsewhere, I’m a rule follower, and part of this is being acutely aware of the long term consequences of my actions. The problem comes when I start drawing out long, ridiculous chains of events that COULD happen and would probably ruin my life. It’s often paralyzing. If I think something’s gone wrong I generally have one of two reactions: I either have a huge adrenaline rush and start accomplishing absolutely everything I possibly can as a kind of ritual to prevent badness, or I freeze up and can’t do anything.

But I also get anxious over the stupidest things. I’m fine with heights and needles and blood, spiders, snakes, death, disease, germs…most of the things a normal person might be a little worried by. But having a day at work with nothing to do? Cue a panic attack because I will get fired and it will be the end of my life as I know it. It’s a very physical kind of a disorder for me. I have some seriously impressive knots in my shoulders and neck (I got a massage last week and the masseuse told me everything felt fine, except my shoulders and neck which felt like “you’ve been hit by a bus”), I get the pounding heart fluttery breath feeling, the tight throat, my whole posture curls into itself. It actually just happened about 20 seconds ago because someone wanted to put off hanging out until after dinner instead of ASAP after work and my brain just started chasing itself in circles chanting “they don’t like you, they never want to see you again” and then laughing like some sort of evil torture expert. It will likely take a few hours before I can work my way back into a basic state of normal heart rate, normal breathing, and relatively calm muscles.

Possibly the worst part is that if I’m bored and my brain has nothing else to do, it tends to just manufacture anxieties. This has led to the additional anxiety I have about getting bored, because getting bored leads to being anxious. I have a lot of recursive anxieties about being anxious.

Any other experiences of anxiety out there?

One thought on “What It’s Like: Generalized Anxiety Disorder”