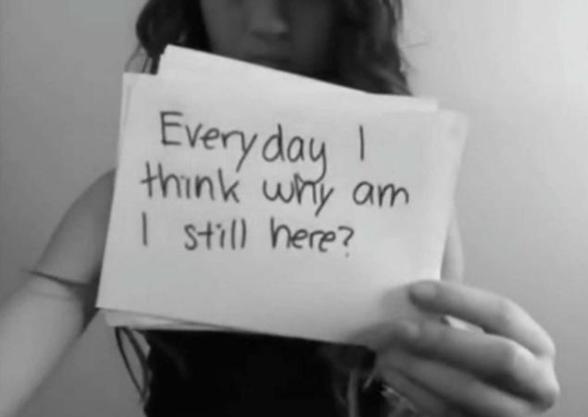 Before I begin this post I want to say that I am all in favor of psych treatment, mental health accommodations and more care and attention given to those who appear to be in a bad place. ABSOLUTELY 100% I ADVOCATE THESE THINGS. I want better access to care, better quality of care, and more quantity of care. ALSO: TRIGGER WARNING TRIGGER WARNING: self harm, suicide

All of that being said, this article in defense of psych treatment for attempted suicide pissed me off. I do support having resources for those who are coming out of a suicide attempt, to help them stabilize and get medication and have mental health care (of course I think all of those things should be available before the person gets to the point of suicide), but the idea that it should be mandatory and the whole tone of the piece rubbed me entirely the wrong way. Now most of this piece is going to using personal and anecdotal evidence, but I think that that was WHY the article pissed me off so much: mental illness and suicide are about very personal and internal experiences, and this article reduced it all to statistics, as if that could explain how someone with mental illness is feeling. That’s upsetting.

Most of the evidence that he uses in the post revolves around the idea that those who are suicidal are not thinking clearly and thus are not in any position to make decisions about whether or not they want life or death. Wow. WOW. Let’s try applying this argument to any situation that does not involve mentally ill individuals. Say for example someone had a heart attack. I’m guessing we would all say they’re not exactly thinking clearly at that point in time or directly afterwards. Doctors would likely stabilize the patient, and then recommend certain changes the individual should make to protect themselves from future problems. Now we may look with confusion at people who don’t implement these changes, but we don’t suggest that we should stick them in a mandatory “healthy eating and exercise” facility for a few weeks afterwards to “stabilize” their mental health and get them to a place where they’re “thinking straight”. That’s because we assume that what these individuals do with their life is up to them and if they want to put their life in jeopardy it’s their own damn business.

To look at it from an opposite perspective, say a mentally ill person was being threatened by another individual. They’re being held at gunpoint. We 100% believe that this mentally ill person has the right to choose whether to be alive or dead in this situation and that another person does not. We would NEVER EVER say “well because you’re mentally ill you’re not thinking straight, maybe you do actually want to be dead you never know”. We have a prejudice towards life. We have no idea whether being dead is better or worse than being alive, but we continually assume that if someone has a choice, they SHOULD choose life. That seems just as unfair to me as telling someone else that they should be dead. It’s nobody’s else’s concern what an individual does with their own life or death (with the exception of family members and close friends and other individuals who will be emotionally impacted, but this article was talking about legal and medical procedures to be enacted by perfect strangers).

At other points in this article, the individual states that the average person suffering from MDD has only about 4 episodes of depression in their lifetime and that these episodes last only 6 months, so the pain is temporary. They also state that with medication most people get better, and that with CBT statistics are even better. Ok, so the first statistic is an AVERAGE. There are many individuals who have situational depression and are diagnosed with depression for a single episode. This brings the average way, way down. For those people suffering from major clinical depression, it’s often an ongoing struggle. Even when you’re not in the midst of a full on episode, it still makes everyday life harder. As someone who has MDD (and who is only 22) I can vouch that I have already been through 5 episodes (probably more, that’s just a basic estimate from the last 5 years), and that each of these has been on the high end of six months. That’s almost half my life for the last 5 years. So telling me that it’s “temporary” and that I’m overreacting to a temporary problem is extremely condescending. It’s telling me that a statistic knows my life better than I do.

He also doesn’t address the fact that co-morbid diagnoses exist and complicate these issues severely. Eating disorders have the highest mortality rates of any mental illness, and they are NOT temporary, nor are they easy to solve with medication or therapy. They are often comorbid with depression, and many of those deaths come from suicide. As he mentioned, BPD is also a high cause of suicide, and this also does is not something that is “cured” but is more likely something that is “managed”. He also states that it often goes away by itself in “a few years to a decade”. A DECADE? I have BPD symptoms, and I can promise you that waiting it out for a decade is NOT an option. Making light of how difficult that is for individuals is again, extremely condescending and doesn’t bother to listen to how difficult life can be when you’re in the midst of BPD for years and years on end, in what feels like a state of unrelenting crisis. It makes perfect sense to want to be done with it.

In addition, his comments about medication seem to ignore the fact that many individuals who try to commit suicide are on medication or have been on medication and have been in therapy before or currently are in therapy. Meds don’t work for everyone and therapy doesn’t work for everyone. OBVIOUSLY we should try to give everyone the best options possible by allowing them access to therapy or meds, but if they don’t want it it’s their choice to decide that their life isn’t worth living and that those things aren’t for them. No one should be forced into doing things they don’t want to do simply because we view life as better than death and think that this will change their mind.

As someone who has been pushed into therapy and meds, life doesn’t suddenly magically get better. Your suicidal tendencies don’t suddenly disappear. You don’t suddenly gain a new appreciation for life that makes you clear of mind. And even now when I’ve been on meds for months and in therapy for years, I still don’t want them. Many people feel this way. If someone chooses to be unhappy then that is their business and if that choice leads to them desiring death, then again that is their business. Only in the case of mental illness do we feel it’s ok to tell people that they HAVE to do what we feel would make them happier. It is incredibly condescending that we are treated as children who don’t know what’s best for us because of our mental illness.

I’m not even going to touch the ageism in the first section of the post except to say that teenagers have the right to bodily autonomy too.

The final element that I want to address is the seeming underlying assertion that a 72 hour lockup doesn’t hurt anyone, and we might as well do it in case it can help. Now as someone who has been taken to the ER without my consent for mental health reasons, I can promise you that it IS NOT HARMLESS. I was not admitted, I was simply asked some questions and when I convinced them that I had no intentions of killing myself they let me on my merry way. But I had to sit and explain myself in a cold, sterile room at 2 in the morning for hours to people that I didn’t know who didn’t know my mental health history and who diagnosed me with “adjustment disorder” (which is bullshit since I told them that I have diagnosed depression and an eating disorder which is why I had been self-harming). I was terrified, I was traumatized, and I was angry. I spent a week after that having a difficult time trusting the person who called, and I proceeded to bottle up my emotions even worse than before because I was terrified of having another similar experience. It was absolutely horrible in every way. Let me reiterate: I was not even admitted. It was still humiliating, exhausting, terrifying, and traumatizing.

From the people that I know who have been in residential or in-patient treatments, they treat you like a child: they take away your possessions, they watch you nearly constantly. I have never heard about someone having a positive experience in a psych ward. I have heard about individuals being restrained against their will, not being allowed visitors, feeling bored and lonely. These things do not help an individual suffering from depression. They are extremely harmful, and suggesting that just because a psych ward is not equivalent to One Flew Over the Cuckoo’s Nest means it’s a great place is ridiculous. There IS discrimination against mentally ill individuals and it DOES take place in psych wards and mental hospitals across the country. So when we consider mandatory psych treatment for suicidal individuals we sure as hell better weigh the negatives against the positives. We have to weigh that these treatments often are traumatizing or scary or discriminatory.

To close, I am in no way advocating for suicide. I do agree that it’s a fairly permanent solution and that exploring the problem from all angles before taking any action is the most prudent route to go, and that this should involve therapy and meds. However the idea that suicidal individuals don’t do this or that they enact a huge decision based on a spur of the moment feeling is ridiculous and infantilizing. From personal experience I have been struggling with the problem of why to stay alive for four years now. If I were to commit suicide in the future (this is not a suicide note. Nobody call the cops. Please dear God I do not want to have to go to the ER and explain that I’m not suicidal. Again.) I would not want my death to be held up as a moment of weakness or a single bad decision. If I were to commit suicide it would be after years of struggling and writing and considering and deliberating. If you look at the lives of individuals who do commit suicide, I think you’ll find more often than not that they have thought about it long and hard. At least give them that much credit. Do their memories that favor. If we’re going to do anything, we should provide everyone with the tools and knowledge to make informed decisions, and then we should give people the freedom of life or death, without the prejudice of saying that life is always and inherently better than death and if you believe otherwise you’re deranged.