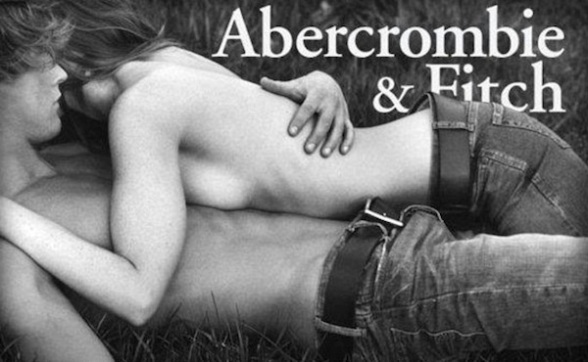 So my dear friend Benjamin who inspires about 99% of my posts lately (and who will be getting 75% of the $0 in profits I make from this post) linked me to the comments of the Abercrombie and Fitch CEO this morning. And I got annoyed (I think understandably) with the comments. And Ben was frustrated. He said that he could understand why Abercrombie marketed the way they did. While he thought it was wrong, it made sense and so he didn’t like how some people attacked it.

It took a while for us to get to the bottom of each other’s opinions, but I think a very telling statement he made was the following: “You are asking a man to give up his company, lose stocks, bankrupt 100’s of stockholders, and put him into poverty

I’m more asking for a solution”

I have NEVER heard someone say this straight out when I’m trying to criticize a company for bad policies before and I thought it was incredibly illuminating. Oftentimes when those on the left ask for higher standards from corporations and marketing, we think that we’re asking them to adjust to our demands as their market. We DON’T think we’re asking them to destroy their companies by taking actions that will sell no goods whatsoever and leave thousands of people bankrupt. We do think we might be asking them to take a slight hit in profits to balance with better marketing policies.

So I’m going to try to explain my thought process and what I think is the process of many social change advocates with an eye to capitalism and profits, and how we are NOT trying to bankrupt anyone or leave anyone out on the streets. Now first and foremost, it is the job of the people running a company in a capitalist society to listen to the people they’re trying to sell to so that they know what will sell and what their customers would like from them: the customers are always right after all. However with this knowledge in mind, big corporations also have a great deal more power than any of their individual customers because they have a lot of money and the actions or words of any individual will probably not really hurt them. Little old me writing this blog and saying “Abercrombie sucks and should be nice to fat people” will not cause Abercrombie to adopt fat-positive policies that then ruin their business. Nor am I asking them to.

When social justice advocates criticize these kinds of comments, what they are trying to do is send a message about the customer base. They are trying to say that the marketing techniques that are being used are not condoned or useful for many customers. They are also trying to bring to light to other people what is wrong with the comments and advocate that people boycott or in some other way illustrate their displeasure. We understand that profits are what drive corporations. And we are willing to reward corporations with profits. Dove has done fairly with with a positive body image campaign because people want to reward corporations that are doing things they see as good. If Abercrombie were to apologize and include XL and XXL sizes in their stores, I am fairly certain that the social justice crowd would be more likely to shop there. So what we are trying to do is exert the power that we do have as a group of customers.

This does not leave anyone homeless or any company bankrupt and without profits. What it DOES do is ask them to do their jobs effectively: to pay attention to what marketing strategies work and to change in accordance. If they cannot do that job and their business fails, that is their own fault. If they have pinned their business success on policies that don’t work, that offend their customers and drive people away, it is their own fault if their business fails, not the fault of those offended.

In addition, the likelihood that the CEO who made these remarks will ever end up homeless is very,very low. He has made a great deal of money off of these policies. However he hasn’t done so at no one’s expense. He has actively discriminated against fat individuals in his hiring practices. These kinds of policies are part of why fat individuals have a much harder time getting a job and advancing in their jobs. These kinds of policies COULD very easily and probably DO lead to AT LEAST one fat person being homeless or jobless. So the trade off here is that a company might go under if they can’t adjust their policies, and their management likely will survive without too much difficulty OR we can continue to discriminate against a large swath of the population and do things that we know for a fact severely diminish their quality of life.

So I think I’ve done a lot to explain the “liberal” position as it were. But what about the position that says “We need to make profits?” Well I don’t think liberals are really ignoring that position. In fact, what many of them are trying to do is simply shift where the profits lie. And I DO think that it’s understandable that some people have opinions that I disagree with. But that does not make them immune to criticism. What I think liberals COULD do to be more understanding to this position is to recognize that when we say “stop having douche policies” a lot of people hear “give up all your profits and go live in a cardboard box under a bridge”. We need to be very careful about what we’re saying: make it clear that we’re not asking for HUGE IMMEDIATE CHANGE THAT DESTROYS ALL PROFITS AND LEAVES EVERYONE DESTITUTE. We’re asking for the market to adjust itself and for consumers to adjust themselves so that our economy can continue while also promoting social justice causes. Emphasize that these things aren’t mutually exclusive (see Dove, although it does have its problems). Emphasize that we’re not trying to PUNISH anyone, we are simply asking for them to take responsibility for the consequences of their actions. If their actions piss off a lot of people, they have to accept the responsibility for that.

Profits ARE what drives the world right now. Many of us don’t like that and we have the right to criticize that. However if we’re going to criticize those people motivated by profits, it works a lot better if we play their game.