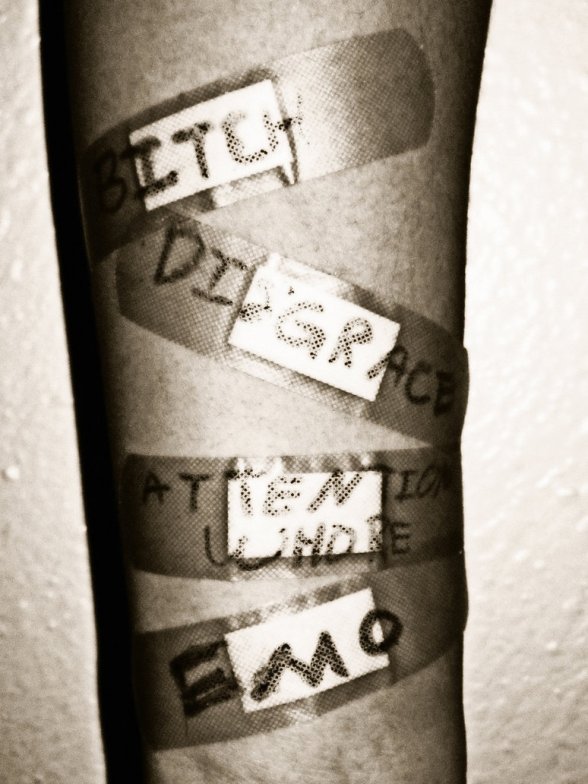 People suck at talking about mental health issues. Oh sure, there are some people who have taken the time to educate themselves who know not to use “OCD” to mean “neat, tidy, type A”, but the media as a whole is just not good at portraying mental illnesses as real, serious, and illnesses rather than choices. More often than not, writers rely on a few stock phrases to describe mental illnesses. And more often than not, these phrases are misleading, reductive, or flat out wrong. There have been a plethora of examples of a few of these recently, and I’d like to highlight two that are damaging and overused.

The first one caught my eye after an odd kerfluffle involving a pair of Victoria’s Secret models. One commented that she would never have a body quite like the other’s and that she thought the other was beautiful. Not too outlandish of a thing to say: even models have some insecurities and compare themselves to other people. The response? “Accusations of anorexia”. Sorry what? Accusations? This is somewhat akin to saying “accusations of having pneumonia”. Grammatically it sort of makes sense, but in the actual ways that we understand the word “accusation” it implies some weird things about anorexia. Namely that it’s a choice, that it’s something bad or wrong, that it’s something offensive and you should feel ashamed of it.

It’s a phrase that gets bandied about fairly often, as if anorexia were some sort of character flaw that we should all be above. In discussions of “skinny shaming” (a phrase that should have its own post), naturally thin people often comment that they are accused of having eating disorders because of their body type. It makes sense that no one would want to be told they have a mental illness if they don’t. It implies that you need to change or that there’s something wrong with you. More often than not, it’s impossible to convince the world otherwise if they already believe you have a problem. That sucks. Of course it does.

But having someone mistakenly think that you’re ill is not the same as being accused of something, and using that wording does a huge disservice to people who actually do have eating disorders. It tells them that their disorder is something they should feel some amount of shame over, something they shouldn’t be open about because it’s clearly still seen as a choice or a character flaw rather than an actual illness. The phrase often perpetuates the idea that people with eating disorders are all skinny and that you can identify them on sight, because it’s most often leveled at thin people with no other evidence of an eating disorder beyond “you’re really skinny”. Very rarely is someone “accused” of having an eating disorder because they express unhealthy or damaging attitudes towards their body.

Other ways of phrasing this idea might not be quite as succinct. “Believed to have an eating disorder” doesn’t come across in nearly as dramatic a light. But it is more accurate, and that means that it’s preferable. The way we talk about eating disorders contributes greatly to the perception of them and whether or not we see them as serious. This is an extremely easy adjustment to make that can help decrease the stigma around eating disorders.

On the other end of the spectrum we have the endlessly overused phrase “battling depression”. In my Google alert for depression today alone I saw three articles that used this phrase in their title. There are probably times and places to use the word “battling” when describing someone’s relationship with depression. There have definitely been times in my life when I’ve felt as if I’m waging a war inside my own mind. But it should not be the only phrase we can come up with to describe an illness. Especially because depression is not always incredibly active in someone’s life, even if they do still have it, the phrase “battling” can be misleading about what it’s like to live with depression. Sometimes you’re surviving. Sometimes you’re struggling. Sometimes you’re being beaten up by your depression. Sometimes you just have it.

Of course it’s hard to have depression, and most people who have it end up fighting back against it in some fashion or other at some point in their life. But not all of us feel like we can do it all the time. Not all of us have the energy to constantly be “battling”, and the implication that having depression is always a battle means that if you aren’t fighting back then you’ve accepted it and you’re not trying hard enough. While depression has started to move past some of the stereotypes and stigmas that still seriously plague eating disorders, we do tend to have a single narrative about it, and it’s rarely one that recognizes the complexity of what it means to experience depression.

We rarely note the fact that people with depression live like most other people, have hobbies, sometimes enjoy themselves, have relationships, hold down jobs, have good days and bad days, sometimes let the bad feelings happen and sometimes work really hard to feel better, just like most other people. They have an additional stressor to deal with, but they’re more complicated than a single trait.

I’m certainly not proposing a complete ban on the phrase “battling depression” but for goodness sakes could we shake it up every once in a while? This is just getting to the point of extremely bad writing, and we can do better.