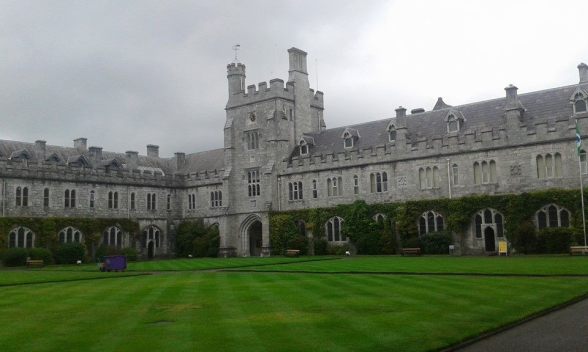 Now that I have your attention with an overly general headline, let’s talk reality.

For quite some time in Western culture, women have been associated with emotions (nature, the body), and men with rationality (mind, culture). Unsurprisingly, rationality in U.S. society tends to be prioritized over emotions, and people who include their emotions in their arguments or conversations are seen as irrational, bad at argumentation, or just plain weak. I’m not going to get into arguing for the existence of this dichotomy in the Western mind, so check out some basic women’s or feminist studies if you’re cynical.

Simultaneous to this lovely set up, in the past few years we’ve been seeing a whole lot of hooplah about trigger warnings, college students, coddling, and how kids these days are so oversensitive. They’re accused of being too easily offended, of throwing away their freedoms in order to create a safe bubble. Safe spaces are mocked, kids are told they’ll fall apart in the “real world,” and talking heads bemoan the state of the youth.

These two issues are not unrelated. Academia has for quite some time been a bastion for white men, a place where “rationality” is said to rule, and where those whose emotions rule are not allowed. My time in college was a time in which objective inquiry was prized above all else. Emotions were to be eradicated. It is not an accident that this worship of the mind over the body is associated with a place that is traditionally male and has been vehemently guarded against female incursions. It’s also not an accident that the further you go into academics, the more likely you are to encounter horrific sexism, including out of control harassment in a number of graduate programs.

Many of the screeds I have read against the coddled college student use language that has typically been applied to women. Overly emotional. Coddled. Sheltered. Children. These are the same criticisms that were used to keep women from engaging in public dialogue for a long time. Of course women couldn’t vote/go to school/hold office: they think with their emotions. They have emotions, even strong emotions, even emotions that come from trauma and abuse. Of course there are some serious differences, as many of the people asking for trigger warnings are people with mental illnesses, and simply being a woman or having emotions (contrary to much of the history of psychology) is not the same as having a mental illness. But the fear of recognizing emotions and making space for them will always have gendered connotations. The disgust at people having emotions, speaking about their emotions, and asking for their emotions to be taken into account will always have gendered connotations.

When we talk about third and fourth wave feminism and the ways that we can embrace things that are traditionally viewed as feminine instead of simply saying that women can do all that men can do, this is what I think of. I think of the ways that the emotional labor women has done needs to be recognized. I think about the ways that we need to make emotional labor a societal endeavor that is taken on by everyone instead of hidden away to be performed by women in their homes. I think of the ways that new social connections and supports are denigrated, from trigger warnings to snapchat. These are the types of things that women have always done: we have warned each other about people and things that are dangerous, we have been the social glue, we have subtly found ways to guide conversation and topic away from spots that we know are sore. These tasks are becoming public through discussions about safe spaces and trigger warnings. Instead of simply creating our safe spaces in nail salons or other “feminine” places, we are speaking openly about the point and purpose of it, discussing the ways that emotions need to be tended in order to have a functional and healthy society.

And of course we are mocked for it. It is seen as unnecessary, weak, or damaging. More than that, it is seen as a threat. This makes more sense when you view it as the attempt to move emotional labor into the public sphere. Not only is it a demand for recognition of oppression and privilege, it is also a demand that everyone shares equally in creating places where people can be safe from those problems, or places where people who have been hurt, traumatized, or abused, can still participate.

For a long time that was hidden work. That was women’s work. And now it’s in the light. It’s ugly. It’s hard. And a lot of people don’t want to do it. So they whine about free speech and the breakdown of higher education so that they don’t have to face the fact that we are finally speaking openly about our emotional health and asking each other to step up to the plate and support each other.

I’m done idolizing the idea that we should all pretend we don’t have emotions or needs or scars. I’m done pretending that humans should prioritize rationality above all else if that means we don’t recognize our human nature as emotional, embodied creatures. I am over the idea that people in college are delicate flowers who haven’t dealt with real life. Trigger warnings and safe spaces were created to help people with PTSD and other mental illnesses. Those are real life. Those are the kinds of “feminine diseases” we ignored throughout all of history and still cannot figure out how to treat. If college students have found things that help them, then I’m all for it, and I’m sick to death of the horror over oh so weak emotions. I thought we had realized how unhelpful that narrative was with second wave feminism, but I guess we’re fighting the same battles.

So again: emotions are not weak. Asking for help isn’t weak. Particularly if you are someone whose brain is a little different, a little dangerous, it is necessary and vital to ask for help in caring for yourself. Emotions are important parts of human life and they cannot be ignored, even in situations in which it would be much easier if we could all just be perfectly rational beings. None of these things take away freedoms or coddle anyone. They create stronger, interconnected people who can function more healthily. I for one am for emotionally healthy people.