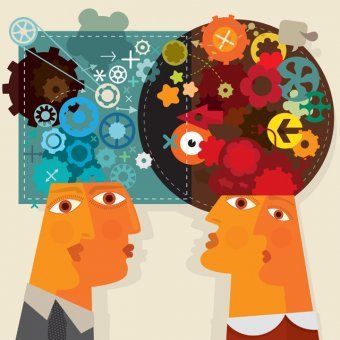 Sometimes themes crop up in life. I don’t know how it happens, but if anything were to convince me of a larger power it would be the fact that many times I will see the same idea or question reappear throughout a variety of areas in my life in a short span of time (this can of course be explained by the fact that I might be thinking a lot about the theme during that time). Recently I’ve been running across the idea of trying to understand a mind that doesn’t work like your own, and the assumption that all minds work the way yours does.

Last night I was talking to my boyfriend about our reactions to movies, and he said that he doesn’t come out of a movie with a reaction: it takes him time to process. I was flummoxed by this. “Don’t you walk out of a movie and think ‘I enjoyed that?’” I asked him. He said he didn’t, or at least not very often. This was almost impossible to process for me. I didn’t know how one could do that. And it hit me that I’d been assuming all my life that everyone reacted like I did to movies or plays or other artistic works: immediately. It hadn’t even occurred to me that perhaps the way people processed a reaction could be different from mine because I couldn’t fathom how that would be possible. Why would I have guessed that someone else would process differently from me until I was faced with it?

This morning I had coffee with my dad and we talked about a wide range of things, but one of them was our mutual confusion over people who are religious and why they think the way they do. I expressed confusion that someone could believe in such a way that is so detrimental to their well-being, particularly without any questioning whatsoever. As someone who naturally asks “why” to nearly everything, it seemed utterly foreign to me to just accept what someone says. I cannot conceive of what it would be like to hear someone claim something and just say “ok”.

All of us do this. It’s thoroughly natural to generalize from our own experience to the experiences of others. Unfortunately it’s also extremely faulty logic and doesn’t hold up against observable reality. It’s also a fairly self-centered way of thinking and a good way to create some difficulties when communicating with others.

But probably the most important element of this tendency is that most of us do it without realizing it. Unless there’s someone else there telling us that they process differently than we do, there’s no way for us to know that we’re incorrect in our assumptions. An example from the history of philosophy: philosophy of mind has spent a great deal of time wondering about whether we can form images in our mind or not. For a long time philosophers would argue back and forth, with one passionately saying that of course there were images in the mind, and another saying that it was impossible. Only recently by looking back through the history of the debate have we realized that each philosopher was essentially generalizing their experience: one who could bring up images in his mind argued that they must exist for everyone, one who couldn’t argued they were impossible for anyone. People published entire books based on the premise that everyone’s minds must work like theirs and they didn’t even notice.

This is all to say that it’s extremely easy to make this assumption without realizing it. Unfortunately, the assumption can also be damaging. It’s the sort of thing that underlies the assumption that listening or learning looks the same for all children. It’s what can lead us to assume that someone is criticizing us or mocking us when they’re expressing things differently. It’s what can lead us to label someone “stupid”. It’s what leads to things like victim blaming, classism, and attempts to write opinions into law.

It may seem like an esoteric or arbitrary element of human nature to focus on, but it can do wonders for your empathy to pay attention to not just what others think, but also how.

Disclaimer: I was in a car accident on Thursday and am still a little loopy from a minor concussion. If this post makes no sense, I blame it on the fact that my brain was forcibly rattle less than a week ago.

Reality is something that confuses and bothers me. After spending enough time in any philosophy class, it becomes fairly clear that we never will have an objective access to reality. We have subjective access, but our perception of reality is always filtered through our senses and our mind, and distorted in some fashion or other because of these things. Obviously this can be taken to the extreme, a la The Matrix or the Brain in a Vat thought experiment, or we can simply ignore it and say that our senses are the best we have and we can use scientific instruments to measure the world. Most people don’t think a whole lot about this. We assume our senses are basically ok, or that if we verify with another person we can work around any potential problems we have in our perception of the world. Most people are ok with an intersubjective reality.

The reason I am not is because intersubjectivity means that everything is a matter of perspective. While we can do our best to put as many perspectives as possible together, things will always look different when you’re standing in a different place, and you can never look at something from all angles at once. You never get a complete picture of reality, and you never get unfettered access to reality. To me, this makes all my conceptions of truth extremely shaky. Particularly in a world where every scientific study has a corresponding paper that says exactly the opposite, and where every therapist has a counterpart telling you exactly the opposite, it’s hard to figure out what is reality. Most people would suggest that being out of touch with reality is a pretty extreme version of mental illness, but let’s look at something that I struggle with every day:

Am I fat? This might seem like an easy enough question for most people to answer. No, Olivia is not fat. You can look at the numbers and see that her BMI falls in the normal category, look at her clothing sizes and see that they are on the small end of average, and look at pictures of her and decide whether she looks fat. That is all information that I can take in and understand. However I can also take in the fact that I am not in the underweight category of the BMI scale, regardless of how much I restrict, that I can see fat on myself, that when I look at myself I can see where I think there is too much fat, and that people similar to me in appearance have been called fat. I have all sorts of contradicting information from internal and external sources, and often I find myself utterly incapable of figuring out which one is “reality”.

It seems to me that this is one of the most important roles that emotions play: telling us what is real and what is not. In studies of individuals who have brain damage in emotion processing areas of the brain, scientists have found that they are incapable of making basic decisions such as chocolate or vanilla. I think that ascertaining basic reality is very similar to this. If you can logically examine something from absolutely every angle but never have that moment of gut certainty that something is right or is what you want, you’ll be left confused and frustrated nearly indefinitely. Emotions spur you to accept something as plausible or real. Now of course they need to be tempered with logic, but trying to exist strictly in a logical mind leaves one incapable of functioning or accepting anything without 100% proof.

Our emotions help to determine our reality, and having any sense of reality seems to me to be impossible without an emotional compass. It also seems to me that emotions are further evidence that we do exist in some exterior reality that acts upon us: while they are primarily made up of brain responses, they do have physical symptoms and these physical symptoms can sometimes trigger the brain response. While it’s possible that these exterior reactions are also only being felt in the brain, it is interesting that if we focus on the physical symptoms of an emotion and calm those, the emotion calms as well.

It seems clear to me that while we have some evidence for the existence of reality, the exact nature of that reality is absolutely something that we have to take at least partly on faith because we have no better information. This bothers me, especially as someone who hangs around skeptics who continually focus on the idea that we should not accept things without adequate evidence.

Faith and emotion often get conflated in situations like this. When you “go with your gut” you’re just taking something on faith because it feels good or right. In reality, our emotions are actually a source of good information about the reality around us. They’re a very quick way to process information. Most emotions have a content or an object: you are angry at something or disgusted with something. Each emotion tells us something specific about its object. Anger tells us that something might harm us or something we care about. For some reason I have spent most of my life discounting the information that emotions provide, despite the fact that it can be understood just like any other source of information.

Reality requires the information of emotions, otherwise it is incomplete and we cannot ascertain the best possible intersubjective reality. Emotion also can give us some sense of comfort or certainty in our reality. Most people who are out of touch with reality are those who spend too much time in their emotions and cannot bring themselves back to logic to analyze different perspectives or possibilities. It’s important to recognize that the opposite is also true: someone who lives their entire life in a philosophy class or a science lab will not have an adequate conception of reality.

So how do we bring ourselves back to reality and trust reality? How do we sort through which constellation of facts constitutes “reality”? Most likely through some form of emotion. Sorry skeptics.