My bus was late today. No big deal, right? Buses are late all the time. This morning was different though. I walked up to the bus stop, and there was a man waiting for the bus. He was Hispanic, and had a number of prominent tattoos. He was also not wearing nearly enough against the cold Minnesota air. Conclusion: homeless or can’t afford jacket.

I’m generally a fairly anti-social person, and so I sidled up to the bus stop quietly, pulling out my bus card and looking at the ground. As I did so, he asked me the time. I checked and answered, thinking he would stop talking. Instead, he struck up a conversation: when does the bus come? Where are you going? Do you speak Spanish? Eventually he ended up telling me about his failed marriage and his time in prison. Part of me was desperate for the bus to show up already because I am not a happy person before my morning coffee, but the longer we talked, the more I realized that I was grateful for the chance to simply be with someone I wouldn’t normally be with.

To be perfectly honest with myself, I judged this man unsafe when I first saw him. I judged him as someone I did not want to converse with. Because of mass transit, I was forced to rethink that judgment. I was forced to be kind to someone, to listen to someone, to share myself with someone. It wasn’t a big interaction, 15 minutes at most. But I’m grateful for it. I heard an experience that I would never have heard otherwise. I gained a perspective that otherwise would have been lost to me. And these things are not small. I exist in a world of great privilege, with other individuals who are well-educated and well-off. I want to have the best understanding possible of those who don’t live in that world, and this moment was illuminating for me.

This person was real. He had stories. He was vulnerable. He just wanted someone to listen, and that was all I could offer him at that moment. I hope that it was enough.

This to me is the most important benefit of mass transit. It removes you from your insulated world and requires you to exist in the world with all the other individuals that exist around you. We live segregated lives. Oftentimes they are self-segregated, but we spend our lives around people who are like us. Particularly for those who are wealthy enough to buy cars, we rarely venture into places that are full of people of color or people in poverty. When we walk past them on the street, our eyes slide by them. We avoid.

When you are travelling with someone, you cannot avoid them. Oh sure, you can put in headphones or read a book, but you cannot stop seeing them. You can’t stop seeing the person who is talking to themself, or the mother who is hitting her child, or the people yelling at each other. You can’t stop seeing the gentle father, or the man who just wants to talk, or the kind person who gives up their seat for the elderly. These things happen and you experience them. You have conversations with these people and you begin to feel the shape of their lives barely forming beyond your ability to understand it. You are challenged by the actual existence, the actual humanity in front of you, of those people who are different from you.

You might be afraid. You might be disgusted. Or you might allow yourself to be challenged to imagine the rich complexity of how they live entirely apart from you. You cannot hide from the nasty things in life when they are invading all your senses: the poverty, the homelessness, the desperation in people’s eyes. 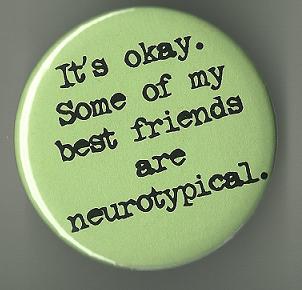 Note: for the purposes of this post I’m using “neurotypical” in a more inclusive way than usual. Generally it’s used to contrast with Autism Spectrum Disorders. In this case I’m going to use it to refer to anyone without a diagnosis of a mental illness or disorder.

I have to admit something: I am not always a person who has a lot of sympathy for others. School comes easily to me, so when I hear someone say “I had to study for TEN HOURS for that test”, I have a hard time replying “That sounds horrible” instead of rolling my eyes and saying “Why the hell did you waste all that time? I didn’t study at all and I got an A.” I’ve spent a lot of time trying to teach myself the empathy required to understand that I’m highly privileged in that regard. But the area that’s actually the MOST difficult for me to be sympathetic is one in which I am highly underprivileged: depression, sadness, and difficult life situations.

One would think that with all my colorful and varied experiences of depression and mental illness, I would be the perfect person to talk to when you’re having a rough day. I’ve been there. I understand. I get that feeling. When I’m talking to someone else with mental illness, I”m fairly good at this (except when I can recognize stupid behaviors that I’ve done in the past like emotional manipulation or passive aggression or compliment fishing). But this week I had a neurotypical friend who is generally very happy and who has had a fairly easy emotional life get hit with something really hard and I’ve been trying my absolute best to be there for him. And I’ve found that my patience dwindles a lot more quickly than I would have expected.

Because here’s the thing: I have spent the last four years of my life spending the vast majority of my days in the emotional state that this friend is in. For the most part I’ve kept quiet about it to him and the majority of those in my life. I’ve worked and worked and worked to even survive to where I am right now. For the most part, my friends have been kind, but they haven’t particularly wanted to hear about how I hate myself. Getting through a week of depression is every week for me. And so when someone says they don’t know how they’ll survive because they’ve spent four days hurting I just want to scream back “THIS IS MY LIFE EVERY FUCKING DAY. EXCUSE ME IF I DON’T ROLL OVER AND ASK WHAT I CAN DO TO FIX YOUR WEEK.” I realize that it makes no sense to compare suffering. Just because my base level of suffering is higher and I’ve learned to handle it doesn’t mean that what my friend is feeling is any less of a major life crisis for him.

But when you see someone have their privilege taken away and they’re landed in the same boat you’re in all the time, it’s hard to work yourself up over it. So for those of us who do not have privilege and who spend all of our lives battling in a way that’s invisible to the privileged, we might have to practice empathy in a new way. We are totally familiar with these experiences and feelings. But we have to have the empathy of remembering or imagining what it’s like to experience them for the first time, to get hit with that wave of depression and anxiety without knowing what it is or whether it will end and how to get through it. We have to remember that we’ve built up skills and resistances, that we have had an education in emotional regulation simply by existing with our mental illness, and that those around us don’t necessarily have that education.

Very rarely do I suggest that the un-privileged take a lot of time out of their day to practice empathy towards the privileged. But when the privileged get knocked off their pedestal, they’re left in a place that those of us who live down here have never experienced, a place that’s scary and lonely and neither privileged nor un-privileged. It is often an eye-opening experience for those people, and if we can bring ourselves to see that they’re experiencing something we don’t have to experience every day, we can help them take some good lessons from that experience. Hopefully it can help us create a situation in which the neurotypical is left with a greater understanding of what it’s like to have a mental illness, and the neurodiverse person is left feeling like they have been compassionate and kind, and gained a stronger friend or ally from the experience, as well as helped stop a cycle of oppression.

And for the neurotypical among us, let me just say that your behavior towards your neurodiverse peeps when you’re doing ok can have a big impact on how much empathy they’re willing to have when you’re in a rough spot. If you never give them the benefit of empathy or of listening to their experiences or of accepting that their experience of the world is radically different from yours, they’re not likely to try to do the same for you. If you tell them they should just change their attitude, or that nothing’s really wrong and it’ll all be ok, or that you just don’t get why they’re unhappy or how they can be so introverted because it makes no sense, they’re not likely to spend the time understanding the nuance of your problems. Empathy goes both ways.

All of that said, no matter what the situation, taking care of self comes first (ESPECIALLY WHEN YOU HAVE A MENTAL ILLNESS). You don’t have to practice empathy at the expense of your own mental health. If you’re having a low spoons day and your friend is breaking down about not getting a job, you get to beg out of being the shoulder they cry on because you never have to give out of what you don’t have. If the difficulties your friend is experiencing and word-vomiting everywhere are triggering to you? You get to tell them to tone it down or stop.  Relationships are always about finding the balance between your own needs and the needs of the other.